Getting to the Show

Simply enter your address for step-by-step directions to the Show!

The average price for a lot close to the Javits Center is $40-$60, plus tax. Many lots add a $5 -$10 surcharge for SUVs and mini vans. Prices are based on a passenger car, 8-10 hours in the lot on a Saturday during a show at the Javits Center Rate Business.

To reserve your parking spot for the New York Boat Show, visit the Javits Center Parking Page and book a spot with rates up to 50% off drive-up.

does not run on weekends.

does not run on weekends.

Take the NY Waterway Ferry from New Jersey to the show

New York City’s incredible energy, excitement and diversity set it apart from all other destinations on the planet—and that’s no overstatement. Our five boroughs have five distinct personalities, with their own vibrant cultures, dynamic art scenes and world-renowned shopping and dining. No matter  what you’re looking for, you’ll find it in New York City. 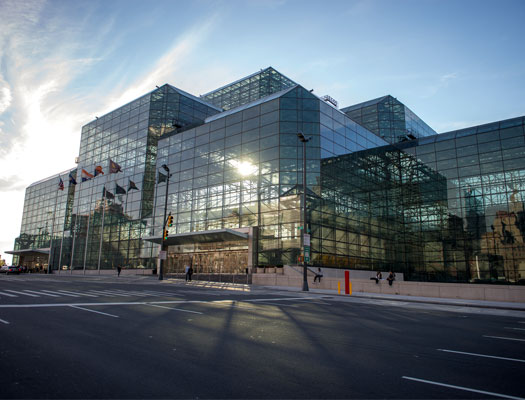 The Jacob K. Javits Convention Center, commonly known as the Javits Center, is a large convention center located on Eleventh Avenue, between 34th and 40th streets, in Hell's Kitchen, Manhattan, New York City. It was designed by architect James Ingo Freed of Pei Cobb Freed & Partners. The controversial and revolutionary space frame structure was begun in 1980, finished in 1986, and named for United States Senator Jacob Javits, who died that year. The Center is operated and maintained by the New York Convention Center Operating Corporation, a New York State public-benefit corporation.
The convention center has a total area space of 1,800,000 square feet (170,000 m2) and has 840,000 square feet (78,000 m2) of total exhibit space.

The Javits Center's Designee for Reasonable Accommodations (DRA) and the Americans with Disabilities Act Coordinator (ADA Coordinator) is identified below. This person will be able to provide information and forms for requesting accommodations as well as for grieving refusals of accommodations.